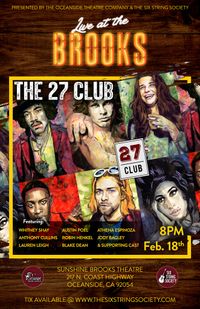 Members of the 27 Club all had at least one thing in common; they all died tragically at the tender age of 27. Was this a coincidence or was there something more? Did they ever perform together? In one mystical and magical evening the night before Woodstock this happened in an apartment in Greenwich Village, NYC. This spellbinding production features the music and tells the stories of the legendary Jimi Hendrix, Amy Winehouse, Janis Joplin, Jim Morrison, Robert Johnson, and Kurt Cobain. Our ALL STAR cast consists of Whitney Shay (as Amy Winehouse), Lauren Leigh (as Janis Joplin), Austin Poel (as Kurt Cobain), Blake Dean (as Jim Morrison), Anthony Cullins (as Jimi Hendrix), and Robin Henkel as the spirit of Robert Johnson. Other in the cast included Jody Bagley and Athena Espinoza as co-hosts, along with Jodie Hill, Phil Pardell, and Kyre Wilcox. This show mixes theatre with the musical magic. Seeing is believing. Doors will open at 6 PM for this event with the show beginning at 7 PM. All Meet & Greet ticket holders need to be present by 6:15 PM to go onstage from 6:25-6:40 PM.